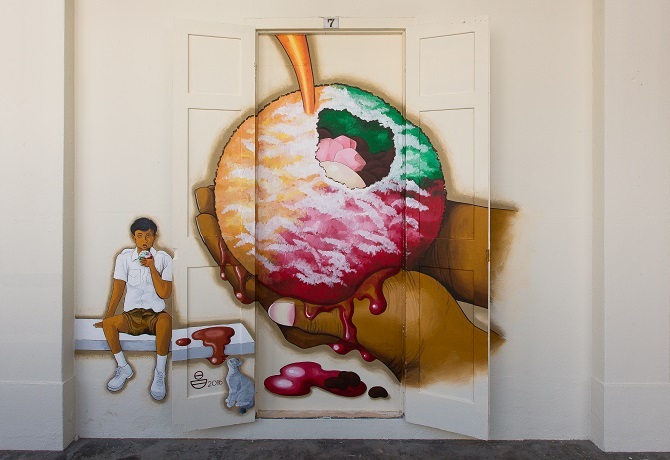 Norman Reedus and Andrew Lincoln of “The Walking Dead” came to town to promote the fourth season of the hit series, with zombie-killing action

The stars of the widely-popular zombie television show, “The Walking Dead”, Norman Reedus and Andrew Lincoln, literally shot their way into the hearts of fans.

Reedus and Lincoln were in town to promote the series at Lasalle College of the Arts, and even fired Nerf guns in zombie-killing style.

As fans of the show already know, Reedus plays Daryl Dixon, a hunter and tracker, and Lincoln plays Rick Grimes, the main protagonist who woke up from a coma to a zombie apocalypse in Season 1. The Walking Dead was recently renewed for Season 5.

Apart from shooting “walkers” (as the roving zombies are called) with Nerf guns and posing for photos with fans, the duo also managed to catch a few sights in Singapore and even tried our infamous durian, which they joked could be added to their arsenal of weapons.

Direct from the Stars

At the press conference, Reedus and Lincoln looked tired from watching the Golden Globes the night before but handled questions with ease.

In real life, Briton Lincoln sounds little like his Southern character on The Walking Dead and he attributes that to his “method acting”.

He said with a laugh, “I don’t stay in character; I stay in dialect. When I’m in the role, I need to get the accent right as I have zombies to worry about; you know what I’m saying?”

The pair also revealed the lengths that fans go to, to prove their love for the show and the actors. Reedus, who keeps all the gifts in his trailer, said, “Sometimes people make creepy voodoo dolls, sex toys, whips… but my favourite is still getting little kid drawings.”

He added, “One lady sent me a very expensive guitar, and I tweeted out that fans should not spend that much money on a gift for me. She told me later that it was her late husband’s guitar and he was a fan of a movie I was in, and she thought that he would like me to have one.”

During filming, the stars are frequently covered in fake blood and brains. Sometimes, they forget to clean it off when they’re done for the day. Reedus related a funny incident, when he rode his motorcycle home when he was still covered in blood and shocked people.

Lincoln recounted a more hilarious tale, “I recently got my driving licence converted in the US and I had just shot a scene where I had the seven bells beaten out of me, so I had (fake) blood all over me.”

He said, “I thought I’d gotten it all, so when I had my picture taken, I had blood all over my neck and the nervous woman was just like, ‘Hard day at the office?’

Nevertheless, it’s not all fun and games. Sometimes they do get hurt and actually bleed.

Reedus said, “I got hurt and had stitches across my forehead. There was so much of my own blood across my face but I had the fake stuff on me as well.”

That’s not the end. His story ends with a tale fit for a movie, with him pulling a driver out of a truck [in an accident] on the way home, after his stitches.

“My story is nowhere near his. I pulled my back out ‘carrying a car’,” Lincoln said, to much laughter.