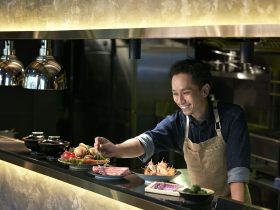 Step into a world where humanity’s existence is threatened by gigantic humanoids. Attack on Titan: The Exhibition, opening at ArtScience Museum on 19 February 2022.

Based on the best-selling Japanese manga series written and illustrated by Hajime Isayama, the exhibition will draw visitors into his visionary imagination. Introducing his intricate worldbuilding and vivid characters. This exhibition also coincides with the screening of The Final Season Part 2 anime which is now showing on Netflix.

Look forward to over 180 artworks by Hajime Isayama ranging from the manga’s earliest days to the present. Attack on Titan: The Exhibition will also showcase new pieces that have not been displayed anywhere else in the world. Alongside are the drafts and sketches from his archives. By visiting this exhibition, you will be one of the first few people in the world to witness these pieces.

Step into Hajime Isayama’s sprawling dystopia, which will include an immersive animated battle sequence set in The Great Titan Theatre. Furthermore, there are displays of Titans, characters, and objects from the manga. You can also get up close to iconic characters like Eren, Mikasa, Armin, Levi, Reiner and Erwin.

One of the biggest highlights is the Great Titan Theatre, where you can witness an epic battle sequence across a 10m widescreen. As the battle unfolds across this huge screen, you will be presented with a spectacle set among the ruins of a battlefield!

The first iteration of Attack on Titan: The Exhibition attracted over 450,000 visitors during its presentation across Japan from 2014 and 2015. It has since expanded to incorporate new artwork and content from the final chapters of the manga. This presentation at ArtScience Museum marks the overseas debut of the exhibition in its latest form.

Attack on Titan fans will be able to buy exclusive merchandise that can only be found at the exhibition store and pose with their favourite characters and Titans at a photo booth.

The Exhibition will run from 19 February to 3 Jul7 2022 with ticket prices ranging from S$14 to S$21. You may click here to purchase the tickets.