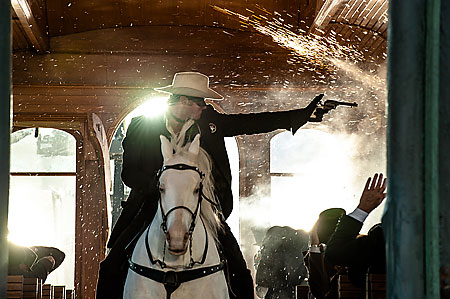 The Lone Ranger rides on

The Great Eastern Yeo’s S.League is coming to a climaxing end, as the battle at the top is matched by the determination of the teams below

This Sunday will see the likes of Tampines Rovers and Balestier Khalsa in action, hoping to keep alive their fading hopes of winning the Great Eastern Yeo’s S.League title.

In their way will be two very young Under-23 teams, the Courts Young Lions and Harimau Muda, who have shown in recent weeks that what they lack in experience is compensated by their never-say-die attitude and tireless running.

It was meant to be the start of Tampines’ final push for S.League glory but V Sundramoorthy’s men were humbled on their own ground in a 1-0 loss to the Courts Young Lions. The two teams are set to do battle once again, in the reverse fixture this Sunday, with a slew of subplots adding to the excitement.

Rodrigo Tosi and Mateo Roskam had numerous chances against Syazwan Buhari, so a repeat of their profligacy won’t do their impending contractual talks any good.

Adam Swandi is into his final month of football before swapping his Nike Mercurial Vapors for the shiny black boots of National Service.

Add to that the pressure on Sundram to finish in the top three and you have a classic David vs Goliath matchup.

Krajlevic on Track to Be Coach of the Season Again

While watching his fellow S.League coaches recruit heavily in the off-season, Balestier Khalsa’s Marko Krajlevic put his faith in youngsters such as Ho Wai Loon and Ignatius Ang, along with his star striker Miroslav Kristic.

That steadfastness has helped Balestier to the League Cup final, and also a comfortable fourth-place in the league standings currently.

Up against Razip Ismail’s Harimau Muda team in Malacca, the Singaporean outfit must be wary of the Young Tigers’ unpredictability.

If Balestier plays to its full potential from now until the end of the season, Kraljevic could be one of few men to win back-to-back “Coach of the Season” awards in Singapore.

Kelvin Leong is Associate Editor for ESPN FC, and a former media officer for the Singapore national football team.