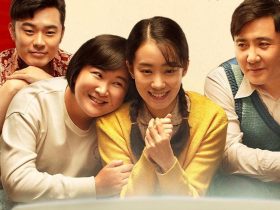 #whattowatch: Movies and Performances to Watch in April 2021

Fly Entertainment artiste Liv Lo makes her TV debut this Dec. She shares part of her interesting life with us

Liv Lo is a familiar face in the modelling world, having had stints in Japan, France, Hong Kong, the USA and the UK.

Liv is also an accomplished MC. She will soon be making her television acting debut in the new season of Channel 5’s crime drama, “Point of Entry”, on Dec 26.

We speak with the lovely Liv on her new, action-packed role.

How has your foray into television been for you thus far?

It has been an expansive and invaluable experience. Starring as Sophie Thomas on “Point of Entry” is my debut role as an actress.
Going from model/host to actress has changed my life and given me a new perspective and new goals in life. I will never watch movies the same again.

Do you do your own fighting in “Point of Entry”?

There are most definitely no body doubles. The most we’ll get is a shin guard or torso padding to protect ourselves
if we get kicked or punched.

There is an awesome stunt man, Desmond, who choreographs our fights. He instructs us in our sequences, reactions, and makes sure the actors perform safely.

The best part is that we are the good guys and will always make an arrest. They may get in a punch somewhere but, really, they don’t stand a fighting chance against Team Epsilon.

I created an online yoga lifestyle community portal, Stretch City. In between work, I am running this entrepreneurial business.
Our site is growing to Stretch Hong Kong early next year, so I am busy starting that up as well as modelling and emceeing.

Can you share with us some fun or memorable occasions on the job?

Our cast and crew have wonderful dynamics and work well together. We often crack jokes in between takes and I sometimes blush, which has got me the nickname ‘dumpling’ on set.

Another time, we were filming in an out of town area next to a famous duck and roast pork restaurant.

I don’t remember where the restaurant was, but it was quite possibly the best meat I have ever had.

What do you want for Christmas this year?

A Kindle! Haha! Filming and running Stretch City leaves me little time to browse for books and to read leisurely. I want to get back to it as a hobby in 2014, and have books on demand.

Your work has taken you to many cities. Name a few of your favourite places.

London for Borough market and museums, Nice for the shopping, Cote d’Azur for the ocean and Hawaii for the ahi poke and beautiful weather.

What would you like to say to your fans?

Hello! Thank you for following my adventures 🙂

Talk to me about the show on my twitter @livvlo or on Facebook.com/livlolivlo.