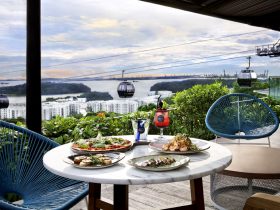 Only happening during the month of July, so don’t miss it

This July, the Pokémon Center is not the only place in Jewel Changi Aiport where you can catch ’em all – Jewel is hosting its first-ever Pokémon Parade!

Every weekend over the whole month of July, witness eight Pikachu, an Eevee and a Mimikyu dance their way through a few of the most iconic parts of Jewel. Their takeover lasts for about 30 minutes and starts on the first floor, at the west corridor of the Shiseido Forest Valley, where they will be bobbing along against the beautiful backdrop of the gushing HSBC Rain Vortex. Then, the characters will proceed to North Canyon (also on Level 1) for a final four-minute performance.

The dance parades will take place every Saturday and Sunday in July, at 2pm and 6pm. Be sure to find a good spot at the locations early to get a good view!

The parade is organised in collaboration with Pokémon Centre Singapore, the first store outside of Japan and also located in Jewel on the fourth floor.

Even if you have seen the previous Pokémon parades held at Sentosa, you won’t want to miss this one. The sight of adorable Pikachu and Eevee, even a slightly creepy Mimikyu, bobbing from side to side is made extra special with the picturesque backdrops at Jewel. Plus, it’s fun to watch the mascots surprise shoppers who were not expecting a parade!

And the parade anticipates another exciting Pokémon event happening at Jewel – the soft launch of Pokémon Explorer! Also known as PEX, it is an interactive mobile game to be embedded in the Jewel app and officially launched on 8 July. If, like us, you still can’t get enough of Pokémon, do download the app and give it a try when you visit Jewel from 8 July onwards. Find out more about the game here.