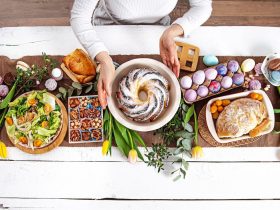 Bam! hits all the right notes with its harmonious use of Asian and Western ingredients

For a dining establishment with a catchy and quirky moniker like Bam!, you expect nothing less than an epic meal.

Led by Chef Pepe Moncayo, who is the former chef de cuisine of the now-defunct Santi at Marina Bay Sands, the open kitchen churns out Spanish-inspired small plates paired with an exceptional collection of sake and wines. For the curious, Bam! is owned by thespian Constance Song, a familiar face on local television.

While the restaurant has since expanded its dining space, the best seats in the house are at the bar, where one can be in the heat of the culinary action.

As with most omakase-style menus, seasonal ingredients take center stage. We left it to Chef Pepe’s wit and creativity as we plunged into an hour-long meal ($128) starting with the Canadian Oyster with Ponzu Sauce.

Plump and velvety in texture, its natural sweetness was well complemented by the dash of zesty ponzu sauce.

On the other hand, the Red Mullet was served in petite slices a la sashimi, bearing a lightly seared surface. Garnishing like pine nuts and fried fish scales added a medley of textures to the simple yet flavourful dish.

To my delight, we were treated to the Cold Capellini, which also happens to be a mainstay on the a la carte menu. The smooth ribbons of capellini were topped with sakura ebi, uni (sea urchin) and thinly sliced seaweed. Each mouthful was a pleasurable mix of sweet and briny flavours.

The seafood feast continued with the Carabinero Prawn on Paella, a vibrant Spanish-inspired creation bursting with the robust flavours of prawn stock. The intense yet delicate taste of the carabinero prawn stole the show.

Despite the culinary flair showcased by the mains, the dessert was a rather unassuming trio of churros, paired with homemade vanilla ice cream. Chocolate was poured over, camera flashes came on and our bellies were promptly satisfied.

With the food being their stronghold, Bam!’s glass-paned cellar of fine sake and wines, is the cherry on top of the cake. 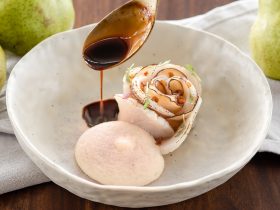