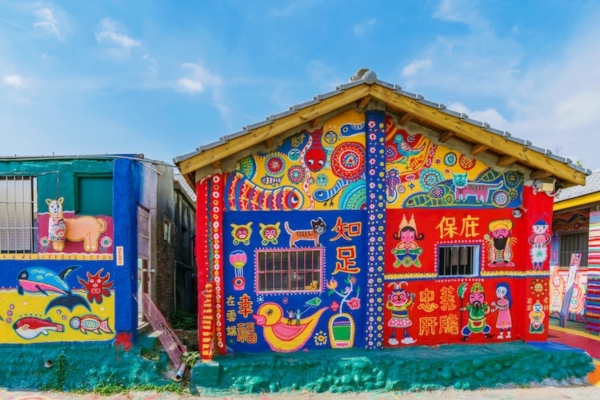 Laid-back and leafy – these were my first impressions of Taichung as my taxi pulled out of Taichung high-speed rail station where I alighted after a 55min ride from Taipei, when I first visited in 2014. But the fleeting glimpses I caught of railway warehouses restored into art spaces on my way hinted at a kind of understated charm about Taichung. Here, you won’t get bustling malls or vibrant nightlife (except in the night markets). Instead, you’ll find enough attractions for a cultural and culinary getaway.

In Taichung, there are 478 national parks, 66 restored historical buildings, and Asia’s biggest art museum in Asia – The National Taiwan Museum of Fine Arts with a total land area of 139, 953 square metres. The annual Taichung Jazz Festival is also the biggest jazz gathering in Taiwan.  In Taichung, you’ll also find Le Mout – a French restaurant owned and helmed by Taiwanese chef Lanshu Chef, who has been highly credited for placing Taiwan on the international culinary map when she won Veuve Clicquot Asia’s Best Female Chef for 2014 (while her restaurant was also placed in the Asia’s Best 50 restaurants).  A desire to taste her creations was what brought me to the city in 2014. And it was what lured me back this June. Lanshu announced in March that she would be closing Le Mout at year end. I just had to return. Whilst this visit didn’t disappoint, I also found other reasons to visit the city.

Besides Le Moût, the other local-owned French restaurant which is still a hot favourite with locals, is  Fleur de Sel  Rather media-shy but extremely passionate about introducing new cuisines to her birth city, chef-owner Justine Li is one of the first Taiwanese chefs to have trained in both Italy and France, and under the likes of Joel Robuchon. While Chen’s style is innovative, Li’s style is comforting and traditional.  Her creations look hearty and wholesome while the flavours taste clean and rich.

In a city where the bubble tea craze is said to have kicked off, there are quite a few contenders for being the original creator of famous drink; but I would say just go to Miyahara if you only have time to try one place. It is a local institution for Taiwanese cookies such as pineapple tarts and  sun biscuits –  flakey biscuits filled with maltose. Besides these, you will also find Taiwanese tea, chocolates, savouries and bubble tea. An ice-cream section offers over 50 flavours, some of which are seasonal like the Kyoho grape. Even if you don’t have a sweet tooth, the interiors offer a visual treat. The first floor is fitted out with antiquated wooden medicine chests and floor-to-ceiling bookshelves. Most visitors compare the experience to being in Hogwarts – author JK Rowlings’ fictional wizards’ school in the Harry Potter series.

Do make your reservation early if you want to dine at Le Moût (lemout.com) Even before the announcement of its eventual closure, it has been drawing in diners from beyond Taiwan since its opening in 2008.  The result of her avant garde creations is a harmony of flavours as Lanshu deftly reinvents classic French dishes using local ingredients and cooking methods.

Just a stone’s throw away from Le Mout is Gubami, Lanshu’s newly ipened high-end version of Taiwanese traditional beef noodle eatery (which will stay open even after Le Mout is closed). You can have it French style – the broth is made over many hours rather similar in style to cooking pot au feu for a clean taste, or have it Taiwanese style where the taste is more robust and traditional.

Drop by at Natural Six Arts Culture Center  if you are a fan of Chinese culture. Housed in a well-preserved building in downtown Taichung that resembles a Japanese shrine – a relic of Taiwan’s colonial past, the centre was originally named Taichung Bukoten and was meant for judo and keno practice. Today, its main objective is to preserve and promote six main Confucius arts such as archery, Chinese calligraphy and Chinese tea ceremony.

Those who love sculptures and architecture should not miss the Asia Modern Museum  at Asia University The museum showcases mostly the university founder’s private collection of sculptures by Henry Moore, Salvador Dali and Auguste Rodin. The unique triangular building designed by Tadao AAndo withits stark exposed concrete walls and diagonal columns that add spatial dimension and diversity,  is also  an attraction in itself. There are also regular exhibitions.