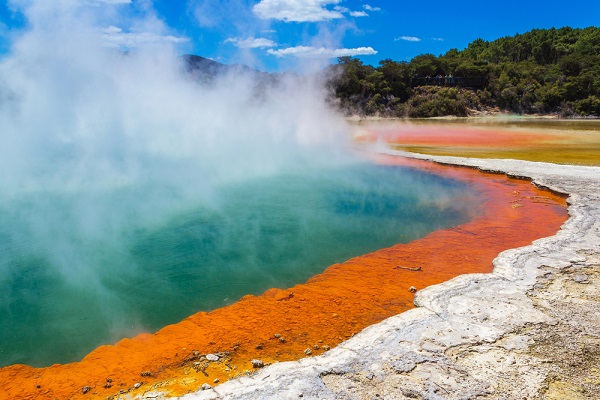 New Zealand Is Home To A Magical Thermal Wonderland

Crunching twigs and leaves, we trekked through a 1000-year-old forest in rubber boots and windbreakers, hearing the wind roar through the tall trees. Because of the uncommonly strong gusts, this was the only route we could take through Shiretoko National Park – and it’s a known bear trail.

But we had trust in our guide, who’s had 21 years of experience in the field. He hauled a backpack of supplies, including a rather ominous spray bottle in case we ran into a grumpy grizzly. We later found out that he is, in fact, the President of the Shiretoko Nature Foundation.

Still, even with such a foolhardy ranger, it was no easy climb. It took us three hours to cover the 5km in and out of the forest. But for the view we uncovered, the work was worth it.

Our guide leading us to the cliff opening nicknamed “A Man’s Tears”.

There are two stunning viewpoints on this trail; the first is a cliffside to which the forest opens up, where you can hear the unfiltered bellow of wind and waves, and feel the ocean spray carried in from the Okhotsk Sea. This secluded spot is nicknamed “Tears of a Man”, because brave men could come here to weep in privacy.

The second opening is about 15 minutes away. This is the highlight of Shiretoko National Park; the Park was named for this view, as Shiretoko translates to “the End of Earth”.

Here, the sheer cliffs drop off into the ocean, earning the area its moniker. I was struck by its resemblance to Australia’s Great Ocean Road. As with most of Hokkaido, the scenery changes with the seasons. In winter and early-spring, the crashing waves are frozen on the cliffs to form picturesque icicles, leading to its nickname, “Tears of a Woman”.

Shiretoko National Park is located in the Shiretoko Peninsula in the east of Hokkaido, Japan.