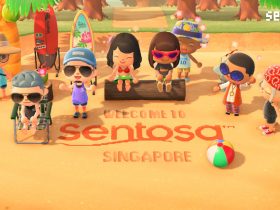 Nintendo Switch Players, You Can Now Escape to Sentosa Virtually with Animal Crossing.

It’s the season of competition as the world’s best athletes gear up for the biggest competitive event in humanity. With the Olympic Games Tokyo 2020 just five months shy, the teaser for “VS” – an SK-II STUDIO Animated Series, has just been released. This first-of-its-kind anthology series features top Olympic athletes battling toxic beauty standards in the form of “kaijus” (“strange beasts” in Japanese).

Being Asian, the threat of obliging to the conventional ‘desired’ standard of beauty is real. We tend to err to the preconceived best, always comparing ourselves with others and thinking that we need to one-up the competition if we want to be seen as beautiful.

You’ve probably seen SK-II’s BEAUTY is #NOCOMPETITION campaign: six world-class athletes declaring their stances on social media, voicing out against constricting beauty ideals that define how they should look, act and feel.

The trailer was released on March 3 (UST), with Simone Biles taking on a 200ft tall “kaiju” (“strange beast” in Japanese) right in the middle of Times Square, in a mind-blowing battle that spanned across 41 billboards.

We were not there to witness that spectacular moment, but this teaser is one we definitely can’t miss. The 30-second trailer teases the upcoming six animated short films which are based on the athletes’ real-life personal experiences with unsolicited beauty pressures – experiences we all, in some ways or other, can relate to. Their stories are shown Shown in mesmerizing visual graphics, as they challenge different types of toxic beauty competitions such as “beauty trolls, pressure, image obsession, rules, limitations, and machine-like mindset”.

The notion of unshackling ourselves from such narrow societally standards of beauty is such a liberating and refreshing experience. Amp this up with futuristic elements, epic visuals and with a meaningful story to tell, and we’ve got the “VS” Series – an animated series that is truly one of a kind.

Can’t wait for the series to drop it? Us too. Subscribe to the SK-II Youtube channel and stay tuned for the series launch. You can also find out more about the BEAUTY is #NOCOMPETITION campaign at the campaign website, and start stepping away from unhealthy beauty competitions too.