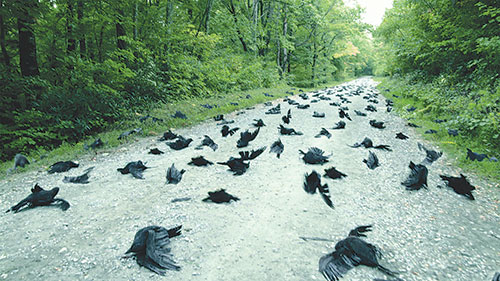 Step aside, futuristic city in ruins. Robot Overlords shows us how small-town teenage heroes save the day

Imagine a small, peaceful seaside town in Britain at midday, with everyone resting within their dreamy cottage apartment houses.

Suddenly, a giant menacing robot crashes down the street, hot on the heels of a teenage boy.

Earth has been conquered by robots from a distant galaxy. Survivors are confined to their houses and must wear electronic implants to be monitored by the intimidating invaders.

But instead of the usual overrun metropolis we see in movies, Robot Overlords is set in a quiet British town, where a group of friends unexpectedly discovers a clever way to evade the deadly robots.

They’ve been trapped in their homes for three years, but when they discover a loophole in the system, the friends head off in search of Sean’s missing father.

Prowling the sleepy streets of this town are formidable Sentries that incinerate any human on sight. Snipers are merciless death machines, and The Mediator is deceptively childlike – but powerful nonetheless.

However, the machines aren’t the only villains in this story. The Voluntary Corps – humans who have sided with the robots – also aggressively enforce the robot quarantine law.

Among them is Mr Smythe (Ben Kingsley), a former Geography teacher, who leads the pack in chasing down our teenage heroes. But Smythe is no one-dimensional villain.

Kingsley, who is acclaimed for his work in Ghandi (1982), Schindler’s List (1993) and Iron Man 3 (2013), said, “What else do you expect Smythe to have done in a situation like that? Do you join the weakest? Or do you join the strongest? I imagine this chap has been pragmatic.”

From Dream to Disaster Fantasy

This breathtaking fantasy all started from a vivid dream that director Jon Wright had.

“A father and son [were] playing a cat-and-mouse game with Nerf guns in a house,” said Wright. “They threw open the curtains, revealing a massive robot that leaned in and threatened to annihilate them. They dropped their weapons immediately and I woke up.”

The dream came to him while he was working on award-winning comedy monster film Grabbers (2012).

It seems that, unlike the many glamorised Hollywood sci-fi movies we’ve seen, Robot Overlords shows you how ordinary people would cope with survival.

Actress Gillian Anderson, known to play secret agents and female bosses (like on TV’s “The X-Files” and “Hannibal”) and who now acts as Sean’s mother, said, “How would an English teacher run in the woods? What kind of fear would be playing across her face? What if I’m just a mum and robots have taken over the Earth?”

Indeed, how would you behave? Would you hit a quest for burning metal, or run screaming after teenage rebels? That’s something to think about while watching this movie!