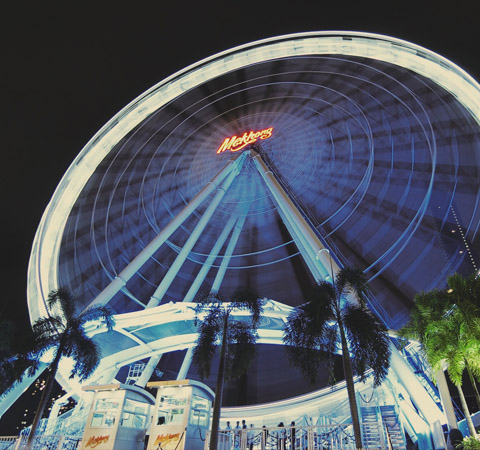 He also has an insta-famous pug called Jager, with 79k followers

Get your party hats on because this weekend looks set to be going to be the ultimate summer party.

Top headlining DJs and acts from all over the world and around the region will be joining forces at Ultra Singapore on 10 and 11 Jun to ensure a weekend of nonstop partying.

We were lucky enough to have a quick catch-up with him.

What have you been up to lately?

I’ve been on the road a lot of late, playing loads of amazing shows such as Wired Festival in Japan and Ultra in Miami where we did our first ever 360 degree live show stream! I’m also excited to release my new single with Austin Mahone, called ‘Creatures Of The Night’.

Most people have the idea that EDM is just clubbing music, and some even categorise it as ‘noise’. How would you describe your music?

Electronic dance music isn’t for everyone, although there are different genres and amazing artists out there for people to discover what they do like!

I don’t like to define my music with just one word or phrase. My live sets are very varied, but my own tracks are a lot more centered around keeping the energy to what fans know as that “Hardwell sound”.

You’ve been all around the globe thanks to your world tour. Are there any more countries or cities left on your bucket list?

I don’t really have a bucket list. I’ve played in so many amazing places and venues already — selling out Madison Square Gardens, for example, was a dream come true for me. I believe in appreciating what I’m already lucky enough to have and hope that my fans can enjoy this with me.

You’ve been voted Top DJ twice by fans for DJ Mag. Would you say it’s harder to make it to the top or staying on top?

Getting to the top takes a lot of hard work, dedication and determination, but who’s to say what it means to ‘make it to the top’?

Attaining the DJ Mag Top 100 #1? Some artists are headlining major festivals that aren’t in the Top 100; I think working as hard as you can to make a success of yourself, whatever level of reaching ‘success’ means to you, is the most important thing.

What do you do in your spare time when you’re not behind the decks?

I spend a lot of time searching through new music and running my label Revealed Recordings. But I like to have a beer and chill out at home with my pug, Jäger!

What’s the craziest thing that has happened to you?

When I was 14, I wanted to be the #1 DJ in the world after watching guys like Tiësto. For that to happen to me and to be the youngest ever #1 at the time was an amazing feeling.

What are some words of wisdom you’ve received that helped you get your career to where it is now?

You’ve already achieved so many milestones in your 12-year long career. What’s your next goal?

My next goal is to keep enjoying what I’m lucky enough to do every day and to give something back, which was exactly why we founded the United We Are Foundation, to give back to those less fortunate through the power of music.

What advice would you give someone who has Ultra Music Festival goals?

Work hard and make your music be heard.

Thanks to Ultra Singapore for the opportunity. This interview was edited for clarity.