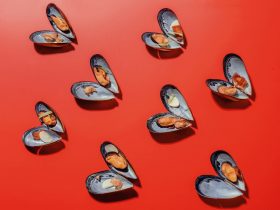 Eyes widened as Culinary Master of Dim Sum, Ge Xian’e, flattened a circle of dough on her palms and deftly shaped 20 folds to create her signature Shanghainese Xiao Long Bao ($7).

The hallmark of a great xiao long bao lies in the thinness of its skin, the flavours of its fillings and the robustness of its broth, she says.

Like Chef Ge who was once named “Best Dim Sum Chef” in a China-wide competition, the other master chefs helming Avenue Joffre read like a who’s who of the Hong Kong culinary scene — with Michelin stars and other international awards to boot.

The dining concept itself is no less glamorous. Inspired by the legendary address of Avenue Joffre (now known as Huaihai Road) located within Shanghai’s French concession, the restaurant celebrates the times where Chinese art and culture thrived with memorabilia from the 30s and 40s.

A Food Tour of China

Believe it or not, the Szechuan Poached Spiced Fish in Chili Oil isn’t as spicy as it looks

A glance at the extensive menu left me spoilt for choice — cuisine from various parts of China were well-represented, from Shanghai, Zhejiang, Szechuan, Beijing, to Guangdong. Dining here would be akin to taking a food tour of China, I thought.

We were first served the Avenue Joffre Appetiser Platter, which included 6 speciality dishes from various regions. A teaser of what was to come, the items that stood out included the Thinly Sliced Beef in Chili Oil ($13) and Zhenjiang Pork Terrine (available as part of the festive set). The former, consisting of tender beef strips coated in rich and fragrant chili oil, highlighted the flavours of the Szechuan region.

Soon after, the fiery-looking Szechuan Poached Sliced Fish in Chili Oil (from $38) and Stir-fried Chicken with Dried Red Chili (from $35) arrived. Even though I fancied spicy food, seeing the sliced fish soaked in a sea of chili struck some fear in me.

To my own surprise, both dishes weren’t as spicy as they looked — the clean taste of the tilapia fish was nicely contrasted with the piquant flavours of the peppercorn. The fried chicken cubes were juicy and toothsome, with the slow heat of dried chili emerging with each bite.

Next, we savoured the Roasted Peking Duck ($75 whole). Prepared in the authentic Beijing style, the crisp skin was served with a fine sugar dip, followed by thin meat slices sandwiched in-between steamed crepes. The execution was faultless, and each morsel of full-flavoured duck was a delightful treat.

The unexpected favourite of my meal was the Hong Kong Style Barbecued Pork and Fried Egg on Rice ($15).

Though simple, the dish was a comforting creation, especially when topped with a flowing egg yolk. I thoroughly enjoyed the thick slices of char siew which had nicely charred and caramelised edges. Though the dish is currently not on the menu, we understand that diners can request for it.

Avenue Joffre combines cuisines from all over China in an elegant setting — altogether a fitting dining concept for celebrations, intimate dinners or simply to fulfil your cravings for top-notch Chinese food.

Avenue Joffre’s Festive Set is available from $69.80 per person.