Get Weekender’s information and bonus guesses on the top-secret film of the year!

It’s arguably one of the most anticipated films of the year, but Interstellar has been shrouded in secrecy.

Since his 2012 success The Dark Knight Rises, visionary director Christopher Nolan has been laying low, refusing to reveal much about his upcoming movie.

Interstellar has been kept so tightly under wraps that nobody really knows what to expect. Those who do know have been (we believe) threatened into silence. Online descriptions are bare-boned and critics’ reviews are tight-lipped.

So, with the truth lying in somewhere out there, we reveal the information we have and offer our guesses on what to look out for.

Ravaged by drought and famine, Earth is inching towards extinction and taking the human race with it. When a questionable wormhole opens up in outer space, humankind’s first reaction is to gamble with precious lives and launch people towards the gaping chasm. Naturally.

But as the astronaut crew ventures through the wormhole, they make a mysterious yet stunning discovery that questions our understanding of the universe.

We’re not deliberately teasing you here – that’s all the information available on Interstellar’s plot. However, we believe that we can make some light of it, so stay with us.

But we have no idea who their characters are. Online sources like IMDb (International Movie Database) and Wikipedia mostly credit them without their roles. Even if they did reveal their characters’ names, there’s still no way of knowing who’s who.

What we do know – and this is up to you to interpret – is that there are “Young Murph” and “Old Murph” credits for the film. This means that Cooper’s daughter will age throughout the film, giving an indication of how long the space voyage will take.

Whether you now have some answers or even more questions, only catching the movie can give you the closure you need.

A movie that’s out of this world

Another certainty is that Interstellar is a cinematically-beautiful masterpiece. It’s difficult to render the Universe such that we feel dwarfed by its stunning magnitude.

Nolan has done exactly that. With his portfolio of successes like The Dark Knight series and Inception, Nolan has maintained a high standard throughout his work.

For Interstellar, he has crafted a visually-arresting set that thrills viewers with the infinite vastness of space and the pure power of existence. This film can only be fully enjoyed in theatres – any other mode of viewing it would not do this magnum opus justice.

It looks like an influential advertorial for space travel. If it really came down to Earth’s extinction, interstellar migration may not be such a big no-no after all.

What’s Nolan being so secretive about? We take a stab at guessing the story.

Disclaimer: We claim no responsibility if any of our predictions come true 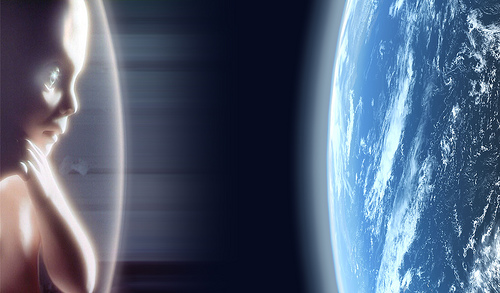 Matthew McConaughey enters a weird warp, befriends a giant black rectangle, and turns into a baby (a la Stanley Kubrick’s 2001: A Space Odyssey). Maybe he bumps into Sandra Bullock in space.

McConaughey finds an alternate universe/dimension/ego in a galaxy far, far away, mutters “Alright, alright, alright…” and takes his shirt off. Hmm… This, many would like to see.

Turns out that McConaughey’s in a dream within a dream, and if you listen closely, you can hear the hiss of a dream machine and Leonardo DiCaprio whispering, “We have to go deeper.”